Israel and YABT: 15 years supporting young entrepreneurs from Latin America and the Caribbean

Santo Domingo, June 15, 2016 - The headquarters of the Global Democracy and Development Foundation (FUNGLODE), was chosen by the Young Americas Business Trust (YABT), the Israeli Agency for International Development Cooperation (MASHAV) and Dominican Association of the United Nations (ANURD) to hold the event "Israel and YABT: 15 Years Supporting Young Entrepreneurs in Latin America and the Caribbean."

Representatives of the institutions involved referred to the importance of cooperation for the development of communities. The panel consisted of Luis Viguria, CEO of the Young Americas Business Trust; Ambassador Gil Haskel, Head of MASHAV; Ambassador Nattanya Cohen, Director of MASHAV’s Training Department; Ignacio Pérez Fernández, Deputy Minister of Industry and Commerce of the Dominican Republic; Emil Chireno, Executive Director of the Dominican Association of the United Nations; and Mark Villamán, Director of the Global Institute of Higher Studies in Social Sciences, an institution that is part of FUNGLODE.

The event was focused on youth development and how the youth participation in MASHAV courses has been so useful for the development of their communities. Alumni talked about their experiences, including Lorena Julio, Founder of Comparlante, who participated in the course "Support Systems for Microenterprise" developed at MCTC in Haifa, Israel; February-March 2016. Adis Ozuna and Natalia Herrera, Co-Founders of Colorblind, who participated in 2014; and Jorge Comprés, founder of La Nocciola.

The impact of cooperation and new opportunities to support and work with Youth in Latin America and the Caribbean was evident throughout the event. In the Dominican Republic, through collaboration of national partners like ANU-RD and FUNGLODE, hundreds of young entrepreneurs and institutions that support business development participated and benefited from a series of workshops thanks to this trilateral alliance.

Luis Viguria, CEO of YABT, made â€‹â€‹a special recognition to Shula Feldman; MCTC specialist from Israel, recently retired after linked to the center in the early 80s, along with other Israeli specialists, led a large number of trainings in Latin America and the Caribbean. The recognition highlights his dedication and commitment to the hundreds of young people who he trained both in Israel and in Latin America and the Caribbean.

Over the past 15 years, through the cooperation between YABT and MASHAV, thousands of young people of the Americas have been trained through mobile courses in Latin America, the Caribbean and Israel. The cooperation between these associations has contributed to strengthening the capacities of young people in order to help them improve their communities.

YABT and MASHAV work in cooperation for the promotion and development of policies and programs to position entrepreneurship as the driver of sustainable economic growth. In this sense, they have joined forces to support the countries of the Americas, through which more than 23,000 young people have been trained in 29 Member States, and more than 7,000 participants received classroom training. As a result, thousands of new businesses and new job opportunities were created by and for young people.

Another substantive achievement of this alliance and contribution has been the resolution (RES/67/202) “Entrepreneurship for Development “adopted in December 2012 by the General Assembly of the United Nations, with Israel as proponent, and YABT a global partner.

Since its inception, YABT has strengthened more than 40,000 young people in 75 countries through programs and activities that allow young men and women to be productive members of their communities, opening a space for them to act as contributing partners to the development of their countries. 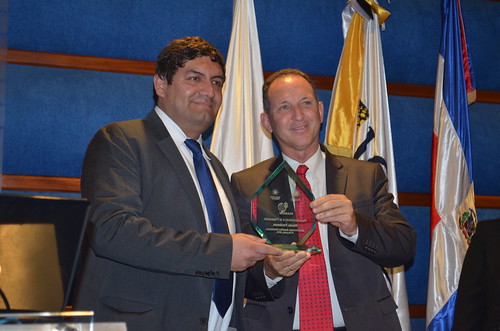 *For donors in the United States, YABT can issue a donation receipt upon request. Close